The other big thing today was the assessment of our portfolios, which were taken away to 04 where all day long harriet and Jo and possibly other tutors scrutinised our work for the past 4 terms, presented as well as we are able on A1 or A2 sheets of card.  We will get formal written feedback, possibly tomorrow.  This is the most formal assessment we've had so far, and it felt a bit scary handing over all our work in this impersonal way.  But the point of the exercise is to prepare us for the possibility of having to present a portfolio for university entrance, or for a job application, or whatever. So it is good that we've had to think about selection and mounting and ordering of our work, and to have that silent hand-over, so like a formal job interview.

And actually, it was also good for our morale, I think, to look back at our work throughout the course and she reminded of what we've all achieved, and how far we've travelled in our learning and practice.  i certainly had almost forgotten some of my work form last year, and some of it I was quite pleased with, such as these nesting, folding boxes, made as a response to the project to make pocket sculptures, for Mark's Conceptual Art workshop session.  At the time, I was in the throes of moving house and retrieving my possessions from 4 months in storage - it seemed like boxes, and their appearance and disappearance, was filling my world.... 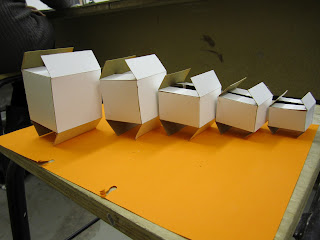 I also seemed to have a fair number of life drawings which I thought better of, on rediscovering them now, than I did when we were doing this regularly last summer.    I still don't feel I've made much progress with this at QR, but we have not hd much tie this year on life drawing, nor on drawing of any sort really, and this is an area I will try to pick up again in other ways once foundation is over. 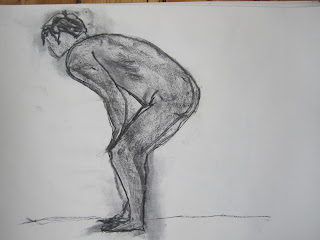 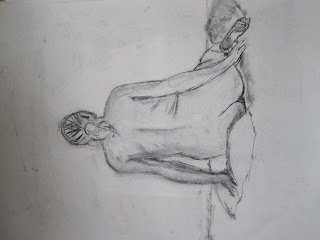 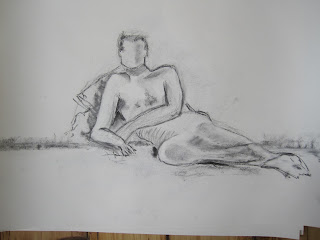 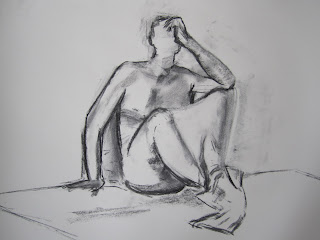 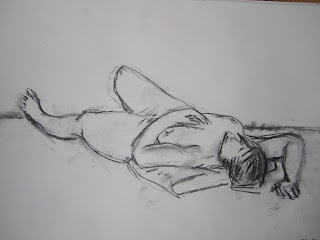 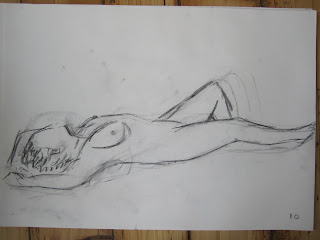 These are some books I made as part of the project we did on the zoo at the end of the first year of the foundation course.   I used old copies of the RWA ART magazine as a base, and then inserted photos of all the myriad warning and prohibition signs scattered around the zoo.  I liked the idea of using wooden sticks (stakes?) as the binding - reflecting on the cages and fences which keep the animals enclosed and the people out. 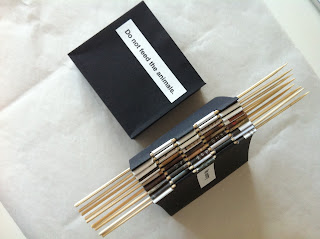 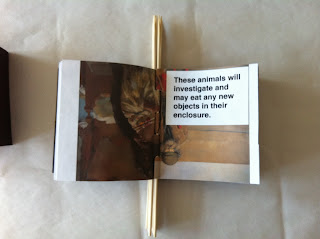 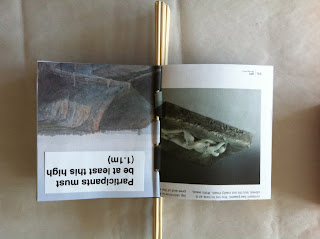 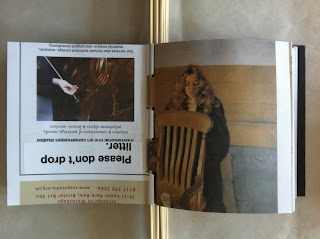 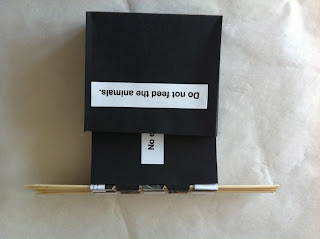 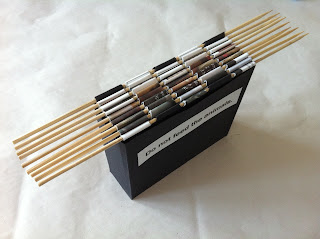 This book was one of a series based on the high-level rope walk-ways constructed for the gorillas in their enclosure.  The two days I visited the zoo, the big gorilla was just sitting morosely at the top of one of the tree-ladders, looking down at the world.  The walkways was unused.  The gorillas must be terminally bored with it all.  I made a print suing a card and indian ink, and printed a never-ending walkway on large sheets of paper which I had folded to make into a folded/concertina book.   I folded it round so the end met the beginning, so it was literally never ending. 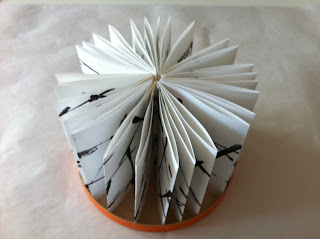 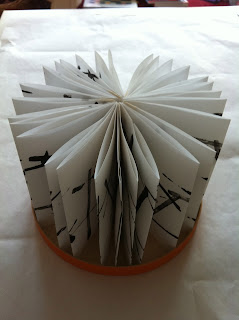 I made several smaller versions based on a book design made from a single, folded and cut sheet of paper, scaling the print accordingly. 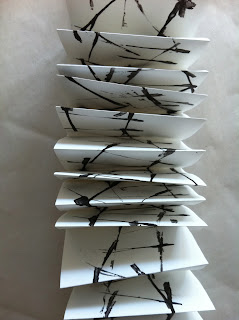 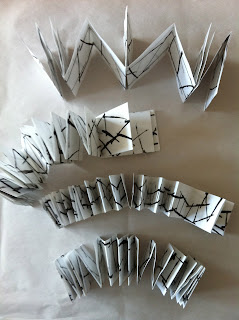 My portfolio was also an opportunity to record some of the things I've one outside of the Foundation course.  Last summer I did a letterpress Printing course at UWE with Tom Snowden and Angie Butler.   I continued experimenting with books made from a cut and folded single sheet.  This meant I had to work out how to lay out the type so it would all work and be properly located/centred on the pages.  I made three separate prints and bound them into tiny books, using covers made from a print workshop done a couple of years ago. 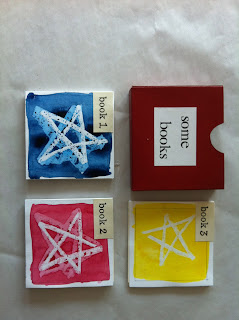 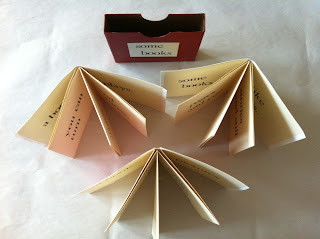 I also did a week learning Bookbinding at UWE with Guy Begbie. 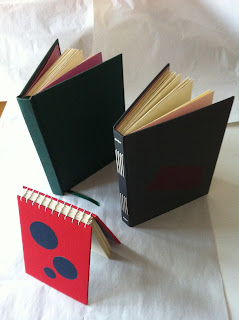 In 2011 I also did a week-long course on collagraph and relief printing at Howard Gardens, UWIC, Cardiff. with Chris Lloyd.  This was very useful, not least because with only 3 of us students, we had loads of time and space and Chris's undivided attention.

These two are drypoint on perspex, the first one from a photo I'd taken, and the second one from a life drawing I'd done previously, 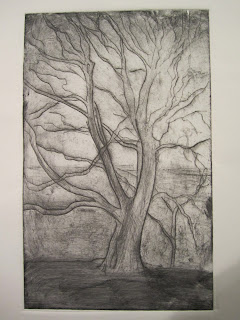 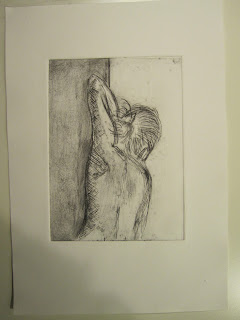 These are collagraphs, using card, primed with shellac, then cut into and layers stripped out, and with plastic tape as a make to create different textures for the printing ink to adhere to, or not. 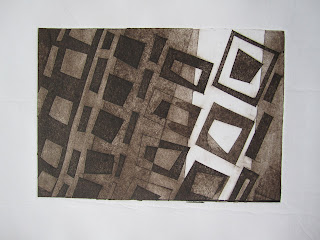 This one is based on a photo I took in New York, looking up at the sky among the tall buildings.  It sued two layers of print, and a paper screen o protect the black from the pink overprinting.  the colours are a bit violent, but I was just experimenting with inks available at the time. 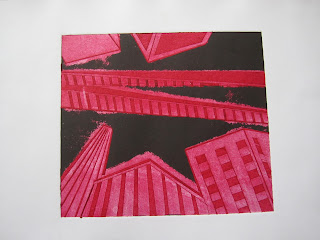 This one was based on a photo of an old stone wall at a cottage in mid-Wales. 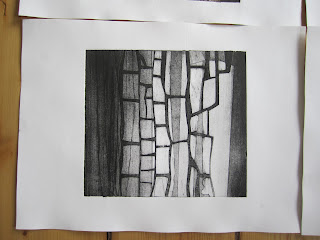 Email ThisBlogThis!Share to TwitterShare to FacebookShare to Pinterest
Labels: Portolio

Helen Thomas
Since September 2012 I am working towards a part-time MA in Multidisciplinary Printmaking at UWE, Bristol. I am a quilt-maker and print artist, exploring new horizons and building new skills.